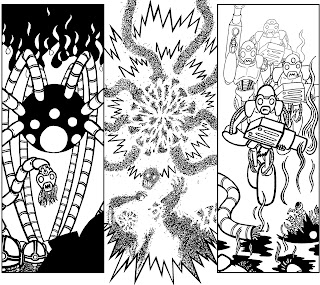 above: has G127 been destroyed? And who are those other Mekkos? Find out in Rise of the Mekko-Sapiens Episode 3. (art by Louis Carter)

Paragon 8 has hit the proverbial stands…and the Rise of the Mekkosapiens continues!

In episode 2 the action heats up, with G127 inciting a robot rebellion against his mechanical enslavers. Several glimpses of the past – and mastermind of the Machine Earth – are given, and we learn who G127 was before his Mekko-conversion. Plus there’s smashing and bashing and explosions, and robots getting blown to bits.

Sounds like a good time, I hope. To me, of course, smashing and bashing and explosions, and robots getting blown to bits sounds like a good time – we’ll see what the first of the strip’s critics think come Monday (9/12/11) when Forbidden Planet’s review is posted. If you’ll recall, episode 1 received…um…a less than favorable write-up…

But this time round there’s smashing and bashing and explosions, and robots getting blown to bits – that automatically makes it better, right? Having the ultra-talented James Corcoran on art duties doesn’t hurt either.

And yet the pencil-monkey carousel has turned once again. Louis Carter has lent his pencils to the strip – and as you can see from the series of panels above and below, has done a bang-up job. Louis and I worked together on a strip called Lugal last year, and his incredibly detailed artwork is perfectly suited to capturing the ticks and tocks of the Machine Earth and its robotic inhabitants. Episode 3 looks fantastic.

Rise of the Mekko-Sapiens Episode 3 is set to appear in Paragon 9 later this year - so go buy Paragons 7 and 8 to catch up on the first two episodes!

above: smashing and bashing and explosions, and robots getting blown to bits in Rise of the Mekko-Sapiens Episode 3. (art by Louis Carter)

It’s rather empty down here, I know. But here – here you’ll soon find reviews, of which there will appear at least three…the first on Monday. Keep your fingers crossed.

The first review is in, and it's pretty indifferent:

From the Forbidden Planet Blog: "Rise Of The Mekkosapiens is the second part of a strip that debuted last issue, and the errant G127 starts to build a revolution having thrown off his programming last time. Art okay, story a little hmmmm, dialogue a touch hmm as well, just too static for its own good. It is, to be honest a bit of a nothing strip in story and art....Mekkosapiens hasn’t really got my attention..."

So I suppose all that robot action upgraded the strip from "shite" to "meh". Maybe episode three will recieve a round about compliment...yeah, maybe.

Edit: 09/15: The next review is in...and it's actually positive! I am both shocked and relieved.

"The Rise of the Mekko-Sapiens" was the weak link last time around, but is much improved with this issue -- although it now appears to be called "The Mekko-Sapiens Uprising", which suggests that Candlish needs to employ a firmer approach with his editing -- with a higher page count, a bit more action, and strong art from James Corcoran. It still seems a bit derivative -- there are some eerie similarities with a Dark Horse series called Syn from a few years ago, but it's too obscure a series to be an influence, I'd imagine -- but at least something's happening, and there are some interesting -- and unexpected, in a story about robots -- musings on religion from writer Matthew McLaughlin."

I do have to mention that I've never read Syn, the comic Mr. Green felt Mekkos bears a resemblance to (funny, as last time it was compared to The Matrix - and I've never seen that either!). I hope that, as the story progresses and the further surprises I have in store for the reader, Mekkos will continue to grow on the reader - and stand on its own. Anyway, this review makes me feel a lot better about the strip.

Posted by matthew mclaughlin at 06:22