Something Wicked This Way Comes... 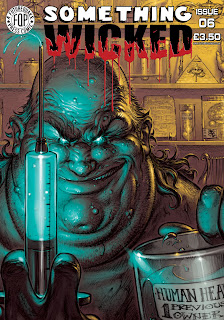 The newest issue of FutureQuake Press’ annual horror comic anthology, Something Wicked, is now available! Issue #6 features an incredibly creepy cover by (favorite) artist Boo Cook, and a collection of stories that are sure to curl your toenails and scare the socks off your feet.

Somehow I’ve managed to sneak three strips into the magazine, past the usually vigilant eyes of editors Bolt 01 and Richmond Clements. Talk about the wardens looking the other way while the inmate runs amuck through the asylum!

Benevolent Martians arrive on Earth to deliver 'the secrets of the stars’ to a tribe of African headhunters in ‘Third World/Fourth World’ (art by Matt Soffe and letters by Jim Campbell). The one-page strip is presented in full glorious color on the magazine’s back cover!

In ‘A Pleasing Symmetry’ (co-story and art by Matt Soffe and letters by Jim Campbell) a man hunts the sinister creature that killed his wife – a creature that is ‘evil in its purest form, a being that feeds on the essence of others and in doing so postpones its own end'.

‘There was an evil thing that lived under a rock…’ and that thing is ‘Glubbleblugg’ (art and letters by Conor Boyle), a vicious beastie with an appetite for children matched only by its rotten disposition. ‘Glubbleblugg’ is a nasty little tale with an unexpected twist.

Order Something Wicked #6 – and FutureQuake #16 while you’re at it – at the FutureQuake Press website here.

Posted by matthew mclaughlin at 01:23