Travel Waaaaaay Down South of the Border with El Bigote... 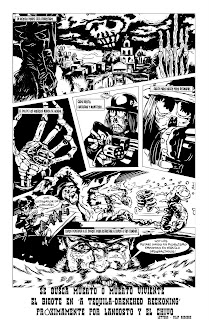 Take a trip South of the Border, the border between Life and the Afterlife, and visit Undead Mexico, where El Dia De Los Muertos never ends…

Living dead banditos and ghoulish conquistadores, cannibalistic muertoads and spectral sessquatches prowl Mexico’s haunted prairies – and it’s up to Undead Mexican Mustache-Quillslinger El Bigote to put them back in their tequila worm-infested graves!

Writer Locust (that's me, but I'm trying to make this sound like an official press release), artist El Chivo and letterer Bolt 01 are set to uncork El Bigote: A Tequila-Drenched Reckoning on unsuspecting comic book readers.
A Tequila-Drenched Reckoning is a special stand-alone series preview issue aimed to introduce readers to and showcase the bizarre world of El Bigote, which just might be the only Gothic Mexican Horror-Western-Fantasy-Comedy comic book in existence!
Blending dark humor and cartoon violence with biting satire and the meanings of unlife, El Bigote is sure to be regarded as profound by someone and nonsense to everyone else.
'So where can I read El Bigote: A Tequila-Drenched Reckoning?' you inquire impatiently.

A special limited (100 copies) print edition of A Tequila-Drenched Reckoning will soon be available for FREE through the El Bigote El Blogote or the El Bigote Facebook Page (details will follow in a future post, but it’ll basically be first come first serve).

To make sure no one’s left out, the issue will also be available FREE digitally through…well…everywhere really: Clickwheel, Dropbox, Comixology, Myebook, ect. The plan is just to get as many people to read and (hopefully) enjoy El Bigote’s adventures.

Buuut in the meantime, they'll continue to produce the comic independently.

The first full-length El Bigote story, La Noche De Los Muertoads, will be available mid-2012, and a series of episodic quillslinger adventures will appear in the pages of British Small Press anthology comicsParagon and AAAIIIEEE!!!.

Be sure to subscribe to El Blogote for updates!

Posted by matthew mclaughlin at 01:37