Concerning the Morphology of Extermination Theory... 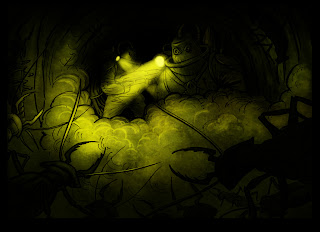 above: 'The only person standing between civilization and infestation is a dedicated Exterminator.' Art by Matt Soffe.

There’s always a story behind a story. The journey ‘Extermination Theory’ embarked on from its conception to the published page has been both strange and trying…to say the least.

Extermination Theory, from Microfiction to Novel:

‘…and what did Stoss find, but a little flesh-basket nest filled with gelatinous eggs. He could see ropey creatures inside, floating through the yolks, squirming impatiently; the brood was going to hatch soon…’

A few years ago I wrote a tale called ‘The Exterminators’ and entered it in a microfiction contest sponsored by Dark Horse Comics. Clocking in at roughly 450 words, ‘The Exterminators’ tells of a boy who lives in a rundown apartment complex and discovers that a pygmy Alien (yes, you read that right) has set up a nest in the building’s basement. When his mother calls the exterminators to rid the complex of the Aliens, the boy, feeling sorry for the little creatures (and unaware of how dangerous even a ‘full grown’ pygmy Alien would be), rescues one of them to keep as a pet…

The story didn’t win the contest, but it did score a nice email from a Dark Horse editor. Based on his phrase ‘nice dark atmospherics’, I shamelessly offered to turn the story into an Aliens novel – it only needed what, a gazillion more words added on…right…?

(ah, I was soooo shameless in my youth, so, so shamelessly shameless)

Couldn’t hurt to ask, I figured (shamelessly). Of course, I never thought I'd hear back either which way.

Well, I found myself surprised when an opening chapter was requested… 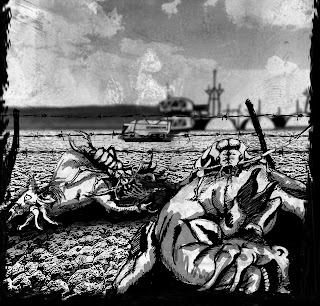 above: the aftermath of an earwig infestation. Art by Dustin Parr.

‘…hissing, the Queen uncoiled her serpentine body – and struck at his knee, her teeth plunging through flesh and shattering bone…’

My idea for the novel was simple: what if the Aliens found themselves on a planet where the native creatures grew no larger than, say, cats? Well, they’d adapt somehow, right? That’s what the species does above anything else. Adapt and survive.

So, after years of evolution, the Aliens on the planet are no bigger than ‘fist-and-forearm’ and live underground in a network of caves – breeding – feeding – biding time until, of course, bumbling humans arrive to set up a few colonies.

I wasted no time in hashing out a dozen pages. The result – that opening chapter – is essentially the same ‘Extermination Theory’ appearing in the Starscape Storypaper, but with alien-earwigs replacing Aliens…

My contact at Dark Horse claimed to love it (“‘contact’ means ‘editor’, but I’m not giving out any names…especially when I still have hopes of someday working for him,” he said shamelessly), and I started counting my money in the bank and mentally memorizing ‘big-time writer’ convention speeches. But after a few largely positive emails our communication cut off, even after I submitted the requested rewrites. Eventually, nearly a year-and-a-half-later, I was told that pygmy Aliens weren’t scary enough and that Dark Horse no longer had any interest in my novel.

Although pretty shattered (a broken heart? too sensitive? yeah, I’m still crushed at a rejection but this experience more than any other taught me that you’ve got to pick yourself back up – still, I do go through a period of mourning for a rejected story before the picking up parts), I realized I really liked ‘Extermination Theory’ and wasn’t about to let it keel over and die so easily. A quick going over, x-ing out any Aliens references and injecting creations and backdrops of my own, and hey, I had new a short story… 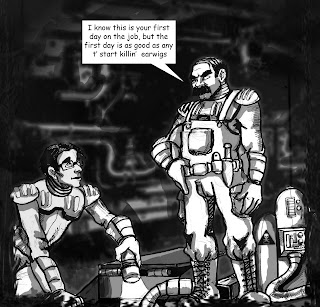 above: Elroy Wargle, self-proclaimed exterminator extraordinaire, and his protege, Stoss, get set to take on a colony of Al - um - earwigs. Art by Dustin Parr.

‘Alright kid,’ Elroy Wargle, self-proclaimed exterminator extraordinaire, announced as he led the teenager into the empty warehouse. ‘I know this is your first day on the job, but the first day is as good as any to start killing earwigs.’

In no time, a magazine called Dark Worlds picked up ‘Extermination Theory’ and paid me a hundred bucks for the first printing and electronic rights. The editor seemed very enthusiastic about the story and planned to run it in the upcoming issue…the issue that never materialized. Months passed, no issue. More months, still nothing, not even a communication from the editor. With some trepidation – editors can be an evil lot, and I find it’s best to leave them alone at all times possible – I contacted him and asked if the story was still scheduled for publication.

The magazine folded, I was told, bad luck and all of that. Disappointing to say the least, but I still had my story and still had my hundred dollars. Wrong. Oh, that damned contract, that damned contract that gave away my rights to the story – at least until it had been printed. Those rights belonged to the creators of Dark Worlds and ‘Extermination Theory’ was theirs to do whatever they wanted with it…including nothing.

So I bought it back. I gave my hundred dollars back and got the rights returned to me. A painful thing to do, because at the time I needed the cash. But ‘Extermination Theory’ had become like a bastard son, the little bastard that gets shoved into the closet while the legitimates get to shine (I have no bastards, promise, and I’ve never shoved a kid into a closet except maybe once or twice). Well, finally the bastard was going to prevail whatever the cost.

So all in all in ended up costing a hundred bucks and about two years.

I was determined to place it in the hands of an editor that would take care of it and do right by it. Then I noticed editor Chris Smillie advertising a very unique idea: a Storypaper (and I highly recommend that you take a peek at this very informative article Chris wrote on the history of Storypapers).

Chris is the editor of Starscape Comics, a small press outfit that specializes in Superhero crossover comics and very cool reprint collections. There is a heavy air of nostalgia breathed into every comic Starscape releases – and a lot of care. Luckily, Chris liked ‘Extermination Theory’ enough to publish it in the first issue of the Starscape Storypaper, accompanied by wonderful the illustrations of Dustin Parr and Matt Soffe.

Order your copy of the Starscape Storypaper here!

Posted by matthew mclaughlin at 04:22