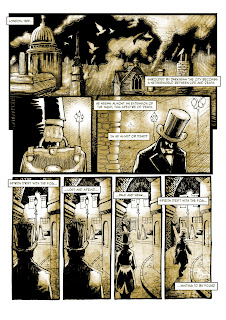 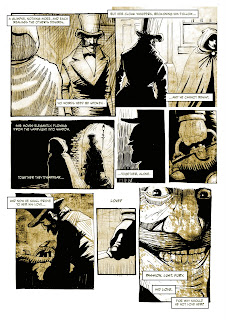 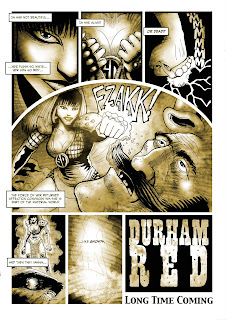 Sometimes a cool project arrives out of the blue...er...red...and 'Durham Red: Long Time Coming' is an example of that.
Rendered brilliantly by Matt Soffe, the strip appeared as a 'silent comic' in the pages of the (very cool) Strontium Dog fanzine Dogbreath. But when Mr. Soffe fancied the idea of adding a bit of narration to the strip, I'm glad he gave the writing duties to me; and although I wasn't so sure the clutter of captions was needed, I couldn't resist contributing to such beautiful imagery.
The biggest problem I faced was avoiding redundancy, and I think I did a fair job of that. I realized right away that the strip had to reman 'silent' and that no dialogue was needed. This only further heaped on to my second biggest problem: being locked into what was already drawn. There was no flexibility. A tough task indeed, working 'backward'.
For some time I sat and just stared blankly at the artwork...until the line "spirits drift with the fog..." came to me. After that the rest fell into place and I finished the script in an hour or so...it was a great challenge, but loads of fun. I hope you enjoy the redux even if you prefer the version without my words! And thanks to Mr. Soffe for giving me a chance to work with him - we've recently begun a followup collaboration, a creepy Gothic tale that is certain to shiver your nape-hairs.
Posted by matthew mclaughlin at 16:01